Due to the Corona Virus pandemic, and Government measures taken to restrict border crossings, KaBeeLo Lodge was unable to open for the 2020 season. Please follow our social media for updates.

We wish all guests, family, friends good health and look forward to the 2021 season.

Many people go fishing all of their lives without knowing it is not the fish they are after... 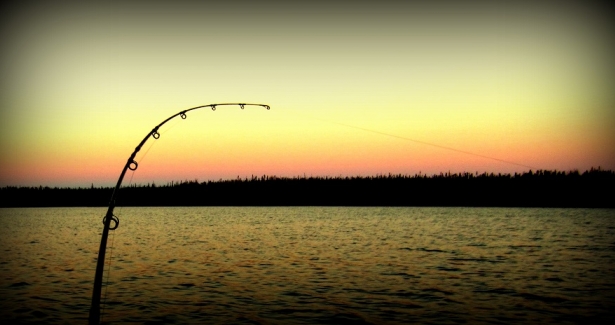 “Walleye are most active during spring and fall. It’s best to fish for them on overcast, windy days, or in stained water, as the walleye’s eyes are specialized to help the fish feed in low-light conditions. Many anglers catch walleye by trolling along weed lines, rocky points, and over sunken reefs. Some of the largest walleye are caught this way during evenings of a full moon.

During the day, walleye can often be found in deeper water over rocks and in weedy cover. Then, one of the easiest and most effective tactics is to drift and jig just off bottom over likely cover until you locate a school. Walleye are a schooling fish, so it’s a good idea to throw out a marker once the first fish is caught. Once located, casting to the school can be quite productive.”

Ontario record: 22.25 lbs (10.1 kg).
Average size: Between 1.5 and 3 lbs (.68 to 1.36 kg). It is common to catch walleye topping 10 lbs (4.54 kg) in Ontario.
Temperature and habitat: Prefers stained waters in the 60 to 70°F (15.5 to 21°C) range, usually on hard, rocky bottoms, but also frequents weed beds in shallow, fertile lakes.
Biology: Spawns after ice-out in rocky rivers and over wind-swept, rubble-strewn shoals and shorelines. Walleye are prolific and scatter eggs randomly.
Range: Throughout Ontario.

Other anglers prefer to troll using:

Ontario has the finest northern pike fishing on the continent, a fish well known for its aerial acrobatics and "aggressive behaviour".  Aside from the agressive fight and aerobatics, another challenge presented by the Northern Pike species is how to filet around the "Y-bone", click here to watch our video tutorial about how to filet a Northern (without the Y-Bone)

Northern’s begin to spawn in the spring at ice-out in spring. Spawning takes place in the weedy shallows as early as March. Prime locations to fish when angling seasons first open are weed lines, flats, points, and creekmouths.

As the water heat ups, northern pike shift to deeper water with submerged weed beds or other forms of cover or structure. During this period, deep-water trolling is your best bet. The most effective places to fish during summer are along the edges of weed beds, drop-offs, points, islands, and humps.

In autumn, when water temperature drops, northern pike become very active again. They return to the weedy shallows, rocky bars, or below rapids in rivers or streams.

Ontario Record: 42.12 lbs (19.12 kg).
Average size: Between 4 and 10 lbs (1.8 to 4.5 kg). Northern pike more than 20 lbs (9 kg) are considered trophies.
Temperature and habitat: Prefers water around 60°F (15.5°C) on rocky reefs and the edges of weed beds.
Biology: Spawns in flooded areas and back bays in spring. Fertilized eggs are scattered randomly.
Range: Throughout Ontario in lakes and rivers of all sizes.

Lake trout inhabit cold, deep bodies of water, often feeding near shore at ice-out, and moving deeper as waters warm.  The best method to catch lake trout is deep-water trolling, but some anglers try their luck spin- or fly-fishing.  They are also known for their "tasty eating".